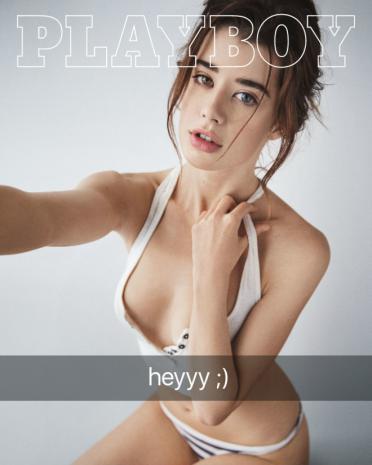 After more than 60 years of brazen nakedness, Playboy's March issue is safe for work. Or rather, it's somewhat suitable for work. It really depends on where you work. Either way, the photographs in the storied men's magazine are much tamer. So much tamer, in fact, that this month's issue doesn't even come shrink-wrapped. Instead, it comes with a matte cover and in a slightly wider size, like an art magazine. See, Playboy now aspires to deliver a no-shame reading experience. It's one of the main reasons the magazine just underwent a major redesign that, among other things, ends the publication's decades-old tradition of running photographs of nude women in its pages.

"When the announcement came out,"—in October—"I definitely got texts and emails that were like, 'what the fuck, what are you guys doing?'" says Mac Lewis, Playboy's creative director. That's understandable. Since its debut in 1953 (the same year Marilyn Monroe posed for the magazine's first centerfold), Playboy has been one of the most famous sources of nude photography in the world.