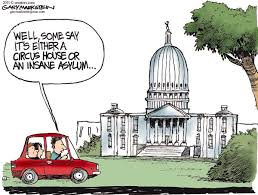 The Imperial City deserves to be sacked by insurgent politicians of the very ignorant kind. That is, outsiders unschooled in its spacious groupthink and destructive delusions of grandeur.

That's why Donald Trump's challenge to the beltway's permanent bipartisan ruling class is so welcome. He is largely ignorant of the neocon and war hawk catechisms and sophistries propounded by joints like the Council on Foreign Relations.

But owing to his overweening self-confidence, he doesn't hesitate to lob foreign policy audibles, as it were, from the Presidential campaign's line of scrimmage.

It is these unpredictable outbursts of truth and common sense, not his bombast, bad manners and bigotry, that has the Acela Corridor in high dudgeon. The Donald's establishment bettors are deathly afraid that he might confirm to the unwashed electorate of Flyover America what it already suspects.

Namely, that Washington's hyper-interventionism and ungodly expensive imperial footprint all around the globe has nothing at all to do with their security and safety, even as it saddles them with massive public debts and the threat of jihadist blowback to the homeland.

For Trump's part, the fact is that most of his wild pitches——the Mexican Wall, the Muslim ban, waterboarding—-are basically excesses of campaign rhetoric that would likely get fashioned into something far more palatable if he were ever in a position to govern. By contrast, the fundamental consensus of our bipartisan rulers is a mortal threat to peace, prosperity and democratic rule.

Worse still, the beltway consensus is so entombed in groupthink that the machinery grinds forward from one folly to the next with hardly a peep of dissent. Nothing could better illustrate that deleterious dynamic, in fact, than the NATO warships currently trolling around the Black Sea.

For crying out loud, the very thought that Washington is sending lethally armed destroyers into the Black Sea is an outrage. That eurasian backwater harbors no threat whatsoever to the security and safety of the citizens of America—–or, for that matter, to those of Germany, France, Poland or the rest of NATO, either.

The shrunken remnants of the Russian Navy—- home-ported at Sevastopol on the Crimea, as it has been since Catherine The Great—-could not uncork the Dardanelles with war-making intent in a thousand years. Not in the face of the vast NATO armada implacably positioned on the Mediterranean side of the outlet.

So what is possibly the point of rattling seaborne missile batteries on Russia's shoreline? It assumes a military threat that's non-existent and a hostile intent in Moscow that is purely an artifact of NATO propaganda.

In truth, these reckless Black Sea naval maneuvers amount to a rank provocation. With one glance at the map, even the much maligned high school educated voters who have rallied to Trump's cause could tell you that much.

The same can be said for the 31,000 NATO troops conducted exercises in Poland and the Baltic republics right alongside the border with Russia. These are not isolated cases of tactical excess or even far-fetched exercises in "deterrence". Instead, they directly manifest Imperial Washington's hegemonic raison d etat.

Indeed, these utterly pointless maneuvers on Russia's doorsteps are just a further extension of the same imperial arrogance that stupidly initiated a fight with Putin's Russia in the first place by igniting a Ukrainian civil war on the streets of Kiev in February 2014.

Washington not only sponsored and funded the overthrow of Ukraine's constitutionally elected government, but did so for the most superficial and historically ignorant reason imaginable. To wit, it objected to the decision of Ukraine's prior government to align itself economically and politically with its historic hegemon in Moscow.

There was nothing at stake in the Ukraine that matters. During the last 700 years, it has been a meandering set of borders in search of a country. In fact, the intervals in which the Ukraine existed as an independent nation have been few and far between.

Invariably, it rulers, petty potentates and corrupt politicians made deals with or surrendered to every outside power which came along. These included the Lithuanians, Turks, Poles, Austrians, Czars and commissars, among others.

Indeed, in modern times Ukraine functioned as an integral part of Mother Russia, serving as its breadbasket and iron and steel crucible under czars and commissars alike. Crimea itself was actually Russian territory from 1783, when Catherine The Great purchased it from the Turks, until the mid-1950's, when in a fit of drunken stupor the newly ascendant Khrushchev gifted it to his Ukrainian compatriots.

Given this history, the idea that Ukraine should be actively and aggressively induced to join NATO was just plain nuts. You might wonder what bantam brains actually came up with the scheme, but only until you recall that NATO itself has been a vestigial organ since 1991.

It's now in the business of self-preservation and concocting missions, not securing the peace of anyone, anywhere on the planet.