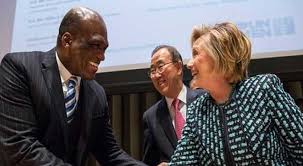 A former UN President who was found dead right before he was going to testify against Hillary (both seen above) just so happened to wind up dead under rather suspicious circumstances. And during a heated election year too! Gee, can you believe her luck?

The New York Post's Page Six reported that after Ashe was found dead Wednesday, the U.N. claimed that he had died from a heart attack. Local police officers in Dobbs Ferry, New York, later disputed that claim, saying instead that he died from a workout accident that crushed his throat.

Adding to the mysterious nature of Ashe's death was the fact that he had been slated to be in court Monday with his Chinese businessman co-defendant Ng Lap Seng, from whom he reportedly received over $1 billion in donations during his term as president of the U.N. General Assembly.

And then there was this: During the presidency of Bill Clinton, Seng illegally funneled several hundred thousand dollars to the Democrat National Committee.

Where Are the Autopsies of People Dying Post COVID Vaccine?

FUNERAL DIRECTOR, I'M LOOKING AFTER THE TERRIBLE MISTAKE, MOST DEATHS ARE VACCINATED

BREAKING: Pfizer Vaccine APPROVED For MASS MURDER By The FDA! - What You Need To Know!