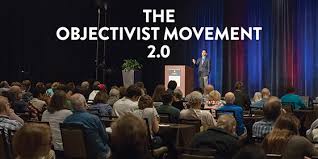 The Ayn Rand Institute (ARI) held its annual Objectivist Conference (OCON) from July 1 to 7 in ritzy Bellevue, Washington. Normally, I would not seek out attendance to objectivism-related events, but ARI and their donors offered generous scholarships to students to support flight, accommodations, and incidental expenses. In the liberty-oriented sphere of non-profit organizations, this was a pretty good deal.

I read Atlas Shrugged in summer 2011. Other than a review for J. Michael Oliver's The New Libertarianism: Anarcho-Capitalism, which (effectively) reconciles objectivist and anarcho-capitalist philosophy, my objectivist interest was limited. These experiences were remarkably inadequate preparation for this past week's events.

First, the venue. As a conference geared in part toward students, the selection of the Hyatt Regency in Bellevue, WA is odd. With a median household income of more than $92,000, one can imagine the retail prices. Those student scholarships only go so far. Most students reserved kitchen-less rooms at the Hyatt, which means eating occurred at one of the few local spots that cater to the wealthier Bellevue residents. Granted, ARI donors do not operate on a student budget, and the venue selection was likely made with this in mind. But that begs the question, who was the target audience: students, or donors?

This brings us to conference content. Lectures were organized into an hour and a half sessions in the various Hyatt meeting rooms (think large ballroom). Several staffers recorded the various talks for a live-streaming audience. Despite the efforts, a small amount of audio and visual technicians, mic glitches, and slide-show non-synchronicity were in abundant supply.

However, the questionable location and technical oddities couldn't hold a candle to what the speakers actually had to say. In some instances, I was so shocked that I took to live-tweeting. Bob Wenzel summarized some of those here. For example, ARI Executive Director Yaron Brook deemed "some people" at the Mises Institute as "really evil." Former Congressman Ron Paul and the explosive following he inspired were "unintellectual" and "emotional." Chief Content Officer at ARI Onkar Ghate enlightened us all in response to a student question as follows: "This might insult some people, but it shouldn't. If you're a student, you don't know what liberty is."

If the brazen denunciations, dismissals, and insults weren't sufficient, one could count on being reminded of just how difficult objectivism is. I'd be willing to bet that at least once every two lectures, attendees were reminded that studying objectivism must necessarily consume one's entire intellectual life. In fact, the speakers implored, "you are not an objectivist. You are [only] a student of objectivism." Those grappling with Ayn Rand's ideas must recourse to "the experts" (various speakers were happy to recommend other ARI scholars as such), given how "radical" the philosophy is.