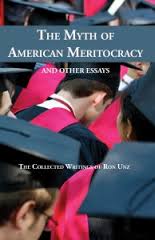 Years ago, when I was tech writer for weird magazines such as Signal and for other more-normal techish pubs, Jews littered the intellectual landscape. They were all over high-end research, such as Bell Labs. The big names were often Jewish, Einstein, von Neumann, Feynman, Gell-Mann, Minsky. The staff list for the Manhattan Project read like a Yeshiva yearbook. The same happened in the arts. Bernstein, Landowska, Rubinstein, Stoppard ("Maidens in search of Godhead…and vice versa.")

Jews were smart, most people figured, not necessarily liking it.  I wondered why without great interest. Genetic determinists of course cooked up evolutionary explanations involving undiscovered genes acted upon by unquantifiable selective pressures to produce assumed results not correlatable with the pressures. Business as usual.

Later I began to notice without thinking about it that the Jewish names were growing thin on the ground. These were not systematic observations. But Asian names were becoming prominent almost everywhere. The Feinstein seemed to be in recession, if only anecdotally.

Something odd was happening, I barely noticed.

Then Ron Unz published The Myth of American Meritocracy, documenting a stunning turnaround of which I had been only vaguely aware. The book deals substantially with corruption in admissions to Ivy schools, with some (I think) good ideas for reform. It also charts the sharp decline in Jewish achievement and the meteoric rise of the Asians. (Actually, I think falling is more what meteors do, but cliches are cliches.)

As one example, consider the NMSQT, the National Merit Scholastic Qualifying Test, given nationally to high-schoolers. To be a Semi-Finalist a student has to test in the top one-half of one percent–sort of upper-middle-brow intelligence.

in 2010  there were about 2000 Semi-Finalists in California, the state with the second highest Jewish population after New York. Citing an analysis of last names, Unz notes that there was only one Cohen, Levy, and Kaplan, but 49 Wangs and 36 Kims.

This pattern, Unz notes with lots of documentation, repeats across the country. For example, in the ultra-high-end high schools such as Thomas Jefferson in Virginia and Stuyvesant in New York. These places are scary smart, CalTech in short pants. Unz:

"Jews and Asians today are about equal in number within New York City but whereas a generation ago elite local public schools such as Stuyvesant were very heavily Jewish, today Jews are outnumbered at least several times over by Asians."