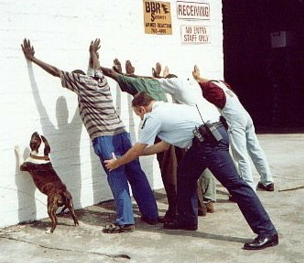 Donald Trump has done it again.

He displayed his contempt for the Constitution and the Bill of Rights.

In Cleveland on Wednesday, he reasserted his support for "stop-and-frisk."

Earlier in the week he voiced his contempt for Sixth and Eighth amendments.

U.S. Republican presidential candidate Donald Trump said on Wednesday he would consider using "stop-and-frisk" policing methods to cut crime if elected, according to two people who attended a Fox News "town hall" taping at a predominantly African-American church in Cleveland…

At the town hall, Trump praised stop-and-frisk, according to an excerpt of the interview released by Fox News.

Trump said he liked stop-and-frisk because it had worked well during the administration of New York Mayor Rudy Giuliani, a Republican who served from 1996 to Dec. 31, 2001 who is now a major Trump supporter. The tactic was supported by Giuliani's successor, Michael Bloomberg.

A federal judge ruled the NYPD tactic is unconstitutional.