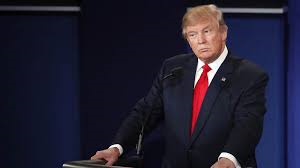 Shortly after 11am, Trump voted for himself in New York Public School 59 on E 56th St. in Manhattan. aAccompanying him were his wife Melania; daughter Ivanka Trump and Ivanka's husband Jared Kushner and the couple's young daughter, Arabella.

After Trump cast his ballot at a machine on the basketball court in the school basement, a reporter asked whom he'd voted for. 'Tough decision,' he said with a smile.

In response to the one question every reporter present wanted to ask, namely whether he would concede if the networks call the election for Clinton, Trump responded: 'We'll see what happens.'

There appeared to be scores, or perhaps hundreds of voters lined up to vote when Trump's arrival disrupted the polling station. Pool had no time to speak with any voters before press was rushed out of the building and back into the motorcade.