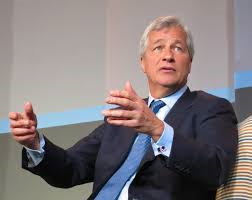 One week ago, when the prospect of a Trump presidency was "calculated" as being anywhere between 0% and 20% by so-called experts, we reported that Trump's campaign finance chair, Goldman Sachs partner and Soros Fund management alum, Steven Mnuchin, was being positioned for something much larger as Donald Trump reportedly told his aides today that he wants Mnuchin to serve as his Treasury Secretary.

Now, according to CNBC, Trump has decided to expand beyond just Goldman alumni, and is allegedly considering JPMorgan CEO Jamie Dimon as the next US Treasury Secretary.

Needless to say, we can only hope that this is an attempt to scare clicks by CNBC instead of the actual truth, because if Trump hopes that he can "drain a swamp" by hiring the swamp puppet master, he - and millions of his supporters - will be very disappointed.

As for Dimon, or Mnuchin, they will be delighted: as a reminder, as Hank Paulson demonstrated so well, the only reason why bankers become Treasury Secretaries, is to be allowed to sell all their corporate stock upon moving to public office, tax free.