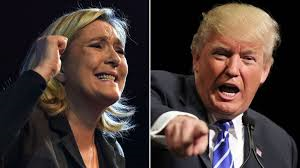 The idea behind this comparison is to suggest that the French far right might very well win the coming presidential elections in May 2017 and create a French "Trump surprise." But, as when it came to comparisons between Brexit and Trump, comparisons between Trump and Le Pen tend to be hyped.

There are some evident similarities between Le Pen and Trump, but there are also crucial differences.

It is true that both tend to reject mass immigration and globalism, that their discourse is deeply anti-elitist, and that the establishment, at least during election time, frenetically smears them. Their current successes flow from global skepticism of politics and the establishment media and the intelligentsia. Furthermore, France, maybe more than any other western country, experiences a deep identity crisis which was recently revived by the migrant crisis. This has been fertile ground for the National Front's wins.

Marine Le Pen has, however, some fundamental differences with Trump.