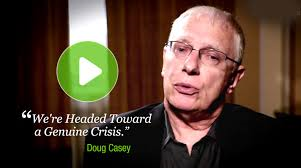 I've just spent weeks with my boots on the ground in Italy. The country has enormous public debt levels, and its banking system is on the verge of collapse.

Italy could trigger the collapse of the entire EU, which could start an irreversible trend. It's a sign that globalism—the secular religion of the Deep State—is a failed ideology.

By globalism, I simply mean the centralization of power into global institutions: the EU, the United Nations, the IMF, the World Bank, NAFTA, GATCA, NATO, and so forth. Globalism is really just a polite way of describing world government, or what George H.W. Bush termed the New World Order.

I'm skeptical of government on any level, especially the global government.

Most people never bother to consider what "globalism" actually means. The mass media simply asserts the idea of globalism as though it were a permanent fixture in the universe, beyond discussion.

Nonetheless, I think the breakdown of the EU represents a failure of globalism. It also appears to be planting the seeds of increased nationalism.

Now, my question is: Is nationalism a lesser evil than globalism?