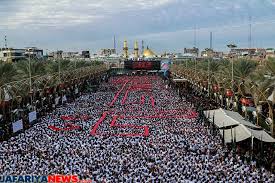 In one of the largest organized marches in the history of the world, tens of millions of Shia Muslims made an incredibly heartening statement, by risking their lives to travel through war-stricken areas to openly defy ISIS. This massive event that would have undoubtedly helped to ease tensions in the West was almost entirely ignored by corporate media.

Women, men, elderly, and children made their way to the city of Karbala on Sunday and Monday last week for the holy day of Arbaeen. Arbaeen is the event which marks the end of the 40-day mourning period following Ashura, the religious ritual that commemorates the death of the Prophet Mohammad's grandson Imam Hussein in 680 AD.

As the Independent reports, massive crowds paid homage to the shrines of Imam Hussein and his half-brother Abbas in Karbala, where they were killed in a revolt against the Umayyad ruler Yazeed in the 7th century AD when they refused to pledge allegiance to Yazeed's Umayyad caliphate. Registering only as a blip on the Independent, this most amazing feat was conducted in spite of ISIS, as well as the sacred annual pilgrimage.

As the UK paper notes, the march comes as nearly 80 people, many of them pilgrims returning from commemorating Arbaeen in Karbala, were killed in the latest Isis attack in the area.

Isis has declared Shia Muslims apostates and targeted them in its bloody campaign to establish a hardline caliphate across Iraq and Syria, according to the Independent.

The brave men, women, and children marched on, knowing that an ISIS suicide bomber had just struck near Karbala the week prior.

In recent years, this march has taken on a dual purpose. Where it was once a march for Arbaeen, it now also encompasses the Shia resistance and protest against ISIS terrorists.

The Primary Mechanism Of Your Oppression Is Not Hidden At All