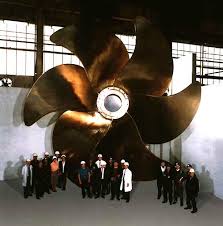 We've had colossal propellers since the days of the Titanic, with its solid bronze, ten-foot-blade props. But these days, large ships require not just bigger propellers, but smarter, nimbler, greener propellers.

The trouble with really big propellers is that they're usually attached to really big, energy-guzzling, pollution-spewing boats, such as cruise ships, container ships, and icebreakers. But Gamper told me massive propellers can actually play a role in making these behemoth machines a little greener.

He pointed to ABB's Azipod thrusters, propellers of up to 20 feet that combine an entire propulsion system. Traditionally, Gamper explained, propellers would be connected to a long shaft line and powered by a mechanical diesel motor to move the ship. All the steering was left up to a series of rudders. But the Azipods have their own electric motor, and can spin 360 degrees, meaning they can be used for steering, too.

"The electrical propeller motors are controlled by drives that control the speed of the propellers," Gamper explained. "The electric propulsion system is therefore able to run the diesel engines at or close to their optimum efficiency point regardless of the vessel's speed. This results in significant fuel savings."