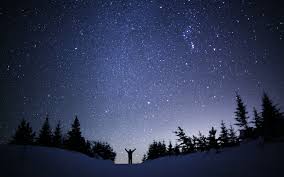 You can't stop gazing at the luminous full moon—you need to share this with Instagram. So you pull out your phone, aim at the heavens, and capture...a fuzzy white blob. The firmament is one of the hardest targets to snap on a phone. Why? A smartphone's camera lens is wide, and it automatically sets the exposure to capture the dark sky instead of the bright objects in it. To up your phone game, try adding some additional technology. These tips will help you photograph celestial bodies near and far.

Before you adjust the settings on your phone, fix the setting around it. Go to a dark area to avoid light pollution, clean the camera lens with a soft cloth to remove any smudges that might produce a glow effect, and use a tripod and a remote trigger to stabilize the phone. (Did you know you can use your headphone remote to take a photo?) On an iPhone, focus on the moon by tapping on it, and then swipe down to reduce brightness.

As Earth spins on its axis, the stars overhead appear to move in curves. The paths they follow are called star trails. Apps that let you customize your camera settings can take long exposures that will reveal them. The NightCap Pro app is particularly easy to set up because it has "star trails" as a preset mode. As you do for moon photos, minimize light pollution, keep the lens clean, and stabilize the camera.

Container Gardening: How to Grow Food With Limited Space

What Does an Error 404 Mean? Fix the Page Not Found Error Message With These Tips