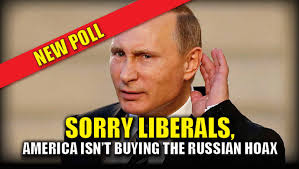 Oops. Did President Barack Obama acknowledge that the extraordinary propaganda campaign to blame Russia for helping Donald Trump become president has a very big hole in it, i.e., that the US intelligence community has no idea how the Democratic emails reached WikiLeaks? For weeks, eloquent obfuscation – expressed with "high confidence" – has been the name of the game, but inadvertent admissions now are dispelling some of the clouds.

Does the Russian government hack, as many other governments do? Of course. Did it hack the emails of the Democratic National Committee? Almost certainly, though it was likely not alone in doing so. In the Internet age, hacking is the bread and butter of intelligence agencies. If Russian intelligence did not do so, this would constitute gross misfeasance, especially since the DNC was such easy pickings and the possibility of gaining important insights into the US government was so high. But that is not the question.

It was WikiLeaks that published the very damaging information, for example, on the DNC's dirty tricks that marginalized Sen. Bernie Sanders and ensured that Secretary of State Hillary Clinton would win the Democratic nomination. What remains to be demonstrated is that it was "the Russians" who gave those emails to WikiLeaks. And that is what the US intelligence community doesn't know.

At President Obama's Jan. 18 press conference, he admitted as much: "the conclusions of the intelligence community with respect to the Russian hacking were not conclusive as to whether WikiLeaks was witting or not in being the conduit through which we heard about the DNC e-mails that were leaked." [Emphasis added}

It is necessary to carefully parse Obama's words since he prides himself in his oratorical constructs. He offered a similarly designed comment at a Dec. 16, 2016 press conference when he said: "based on uniform intelligence assessments, the Russians were responsible for hacking the DNC. … the information was in the hands of WikiLeaks."

Note the disconnect between the confidence about hacking and the stark declarative sentence about the information ending up at WikiLeaks. Obama does not bridge the gap because to do so would represent a bald-faced lie, which some honest intelligence officer might call him on. So, he simply presents the two sides of the chasm – implies a connection – but leaves it to the listener to make the leap.

FLASHBACK: Trump Predicted Obama Would Attack Iran To Get Re-Elected

Barack Obama welcomed leader of US embassy attack to the White House:

Trump ignores criticism for outing impeachment whistleblower and doubles down with claim...

Leftists Lash Out At ICE's Fake University... An Obama-Era Scheme

Obama on Wealth Inequality: In Total Denial of His Contribution by Ron Paul

More Than 100,000 DACA Applicants Have Been Arrested--Murder, Rape, DUI