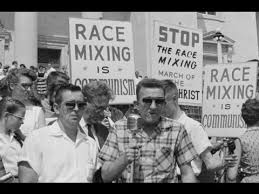 "Racist" is the favorite epithet of the left. Every white person (except leftists) is a racist by definition. As we are defined as racists based on our skin color, I am puzzled why we are called racists a second, third, and fourth time due to specific acts, such as favoring the enforcement of immigration laws. For example, President Donald Trump says he is going to enforce the immigration laws. For the left this is proof that Trump has put on the White Sheet and joined the KKK.

The left doesn't say what a president is who does not enforce the laws on the books. But let's look at this from the standpoint of the immigration laws themselves. In 1965 a bill passed by the "racist" Congress and signed by the "racist" President Lyndon Johnson completely changed the racial composition of US legal immigration.

In 1960 75% of US legal immigration was European, 5% was Asian, and 19% was from Americas (Mexico, Central and South America and Caribbean Islands).

In 2013 10% of legal immigrants were European, 30% were Asian, 55% were from Americas, and 5% from Africa. http://www.migrationpolicy.org/article/fifty-years-1965-immigration-and-nationality-act-continues-reshape-united-states

The 1965 Immigration and Nationality Act is a very strange law for racists to have enacted. Would racists pass a law, which has been on the books for 52 years, that fundamentally transformed the racial profile of the US by limiting white immigration, thereby ultimately consigning whites to minority status?

We could say the racists did not know what they were doing, or thought they were doing something else. However, the results have been obvious at least since 1980, and the law is still on the books.

We live during a time when there is an abundance of information, but facts seldom seem to inform opinions. The left delights in branding the Founding Fathers racists. The left was ecstatic when a 1998 DNA study concluded that Thomas Jefferson was one of eight possible ancestors of Eston Hemings, a descent of Jefferson's slave Sally Hemings. The left seized on the implied sexual relationship as proof of Thomas Jefferson's racism.

Let's assume Jefferson had a sexual relationship with Sally Hemings. Does this prove he was a racist, or does it prove the opposite? Why is it a sign of racism for a white to have sex with a black? Does this prove that James Bond was a racist in the film "Die Another Day"? Do we really want to define racially mixed marriages as racist, as a white conquest over a black, Asian, or Hispanic?

The left has declared the Declaration of Independence and the Constitution to be racist documents and, therefore, proof that the US was founded on racism. The left is particularly incensed that the Constitution counts enslaved blacks as three-fifths of a white person. Is the three-fifths clause a sign or racism, or was it a compromise to get an agreement on representation in the House of Representatives?

The issue was whether the North or the South would have majority representation in the House. The country already had different economic interests which came to conflict in the War of Southern Secession, which is mischaracterized as a civil war. (A civil war is when two sides fight for control of the government. The Confederacy was not fighting for control of the government in Washington. The South was fighting to secede from the union in order to avoid economic exploitation.)

Navy admits it has secret unreleased video from infamous USS Nimitz encounters with...