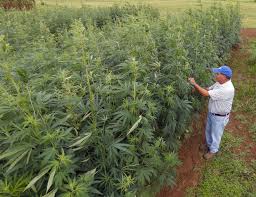 (Natural News) After decades of prohibition, hemp is once again an agricultural commodity in the US. Hemp is a variety of Cannabis that lacks THC, the plant's psychoactive constituent, so hemp is not used as a recreational drug. Real Farmacy tells us that hemp was first grown in Kentucky in 1775, and that nearly all of America's hemp production after the Civil War came from the Bluegrass region of the state. Now almost 25% of the nation's 9,650 acres of hemp are planted in Kentucky. Tobacco production still leads that of hemp in Kentucky by far, with 72,900 acres cultivated in 2015. But the winds of change are blowing across the state. Real Farmacy attributes that change to the growing acceptance of Cannabis nationwide, with more and more states allowing for medicinal and recreational use.

Quoting from the website, "There were strict controls on hemp for many decades amid anti-drug sentiments, making it illegal to grow without a permit from the government. In 2014, the U.S. farm bill authorized state agriculture departments to create industrial hemp research pilot programs, reopening production opportunities. Only 33 acres were planted in Kentucky that year. By 2015, seedings rose to 922 acres, and jumped to 2,350 acres in 2016, according to the state's agriculture department.

"As the tobacco market continues to decline and prices for grains and commodities remain depressed, farmers are looking for alternatives. The industrial hemp business will only grow stronger as the years go by and this seems promising to a lot of Kentucky farmers. Total retail sales of hemp products in the U.S. reached $573 million in 2015, according to the Hemp Industries Association. Sales by conventional retailers are growing. Products can even be found in stores like Costco and Target, in addition to specialty retailers."

Hemp is one of the most useful plants on the planet.

What Does the Price of Gold and the Coronavirus Have to do with Each Other?

US Pending Home Sales Plunge Most Since 2010

What I Bought to Prep for a Wuhan Coronavirus Lockdown

Is this the Jerry Springer Show?

Police Vs. Firefighters In Paris Battle Royale! Is This Really A New Peace Plan??

Mag 7.7 quake hits between Cuba and Jamaica, but no injuries