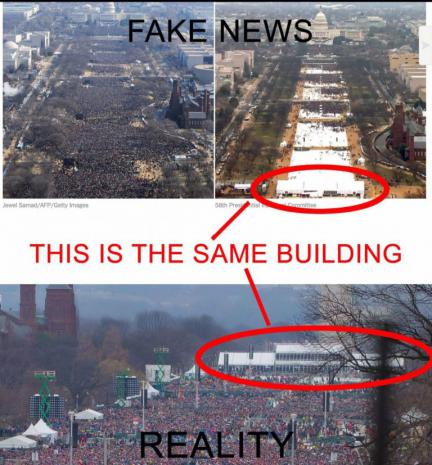 First, CNN tried to claim the crowds came disguised as an empty field for Trump's inauguration (viewed internationally on TV by 30 million — ho hum) by posting photographs of the crowd gathering to hear his noon speech — photos taken at 8:20 a.m. Jan. 20, when hardly anyone had arrived — and comparing them to Obama's crowd — presumably taken at the actual moment of the failed community organizer's final, 2009 inauguration.

In fact, Trump's crowd may well have been smaller than Obama's.

After all: a) Washington, D.C., being full of government employees, is 75 percent Democrat (6 percent registered Republican, the rest "other"), so Democrats will almost always draw bigger crowds there, while Republicans or freedom-lovers wishing to make their presence felt are obliged to fly or drive in from points West and South; b) CNN chose not to point out that anarchist protesters were beating up Trump fans trying to enter the area through a restricted number of access points, without much intervention from D.C. police; c) it was threatening to rain, and . . .