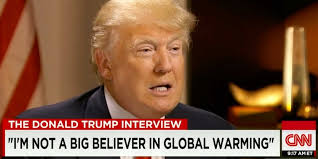 The agency is responsible for much of the federal government's research on climate change.

With both NASA and the Environmental Protection Agency (EPA) in President Trump's crosshairs, climate change deniers in the White House and Congress wishing to gut research on the topic will also be looking toward the National Oceanic and Atmospheric Administration (NOAA), which oversees a lion's share of the federal government's climate change research. There are already troubling signs indicating the direction the agency is headed.

Kenneth Haapala, leading policy expert for the Heartland Institute, a right wing think tank notorious for spreading climate change skepticism, appears to have been a part of the Trump transition team for the Department of Commerce, which includes the National Oceanic and Atmospheric Administration (NOAA)—one of the federal government's main agencies for climate change research.

After a letter sent to Trump on January 24th from Democratic congressmen expressing concern over Haapala's role in NOAA's transition, the administration has said he is no longer a part of the team. The details of his involvement are unclear, but concerns remain for NOAA employees.

"In the past, [the Department of] Commerce hasn't concerned itself overly with NOAA operations," a NOAA affiliated researcher who wished to remain anonymous told Motherboard. "Now nobody knows what the new situation is going to be."

"People are politically aware at NOAA and are concerned," she said.

Haapala has a masters in economics but no academic training in the natural sciences. He has accused the federal government of trying to expand its power under the guise of climate change legislation that he says is based upon "flimsy science," and fear mongering.

After becoming aware of Haapala's presence on the transition team, Democratic Congressmen Sen. Sheldon Whitehouse of Rhode Island and Rep. Raúl M. Grijalva of Arizona crafted a letter imploring President Trump to remove Haapala from this position.  "He certainly does not understand or appreciate NOAA's mission and therefore is unfit to serve in any capacity that oversees operations or personnel decisions at the agency," they wrote.

"The work NOAA does is too important to public safety and the economy to allow ideologues like him to meddle with the agency and its scientists," said Rep. Grijalva in a public statement.

CNN in free fall since Trump left the White House

'I was right very early on': Trump pats himself on the back as liberal media flip-flops...