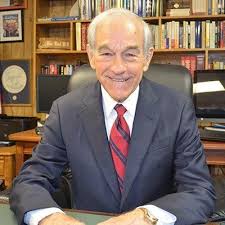 Champion of freedom and liberty, Dr. Ron Paul, decided to grade President Donald Trump's speech last night, in real time. The final result of his series of tweets is nothing short of incredible and highlights how blinded some have become to the grandiose persona of The Donald — ignoring all his broken promises and audaciously excusing his championing of the police and warfare states.

When I saw the following tweet in my Twitter feed last night, I got giddy like a kid on Christmas as I know that Ron Paul is the one person who refuses to compromise on principle and is unafraid of backlash for calling out the hypocrisy and warmongering of the establishment — including Trump.

Opening up his speech, Trump promised to increase military spending. In fact, he announced this week that his administration will increase the already massive and bloated military budget by a whopping $54 billion.

Trump then promised that "Crumbling infrastructure will be replaced with new roads, bridges, tunnels, airports and railways, gleaming across our very very beautiful land."

This sounds fine and dandy, however, Paul pointed out the obvious:

The below is one of the things that Karl Lentz does when taken to court by Government. Since the Government is the one who is most often the plaintiff, the Government has to get on the stand. Government can’t do it. Listen to Karl at - https://www.youtube.com/watch?v=iP8zHINJGxc - “143 - Karl Lenz - Karl's Lawsuit; Claim/Complaint; Witnesses; Summary Judgment; Conusance; etc.”

To the judge: Is it not true that for any statement to be deemed admissible evidence, it has to be under oath or affirmation? The judge will answer: yes. To the Judge continue with: Therefore, before we proceed, it is my wish to be sworn in through affirmation so there can be admissible evidence pressed upon the record in the event of and for appellate review if it is necessary. And it is my wish that the other side do the same. http://www.myprivateaudio.com/Karl-Lentz.html

Ron Paul is good at showing us the hypocrisy of Trump. But, what about Ron Paul's hypocrisy? Remember, he's a politician, as well. Consider the recent jury verdict in the Oregon/Bundy brothers debacle. If Ron Paul was honest, he would promote the Preamble, and the 6th, 7th, and 9th Amendments in concert. Why? To show how the people can individually put Government down. Google and Youtube search on "Karl Lentz common law."