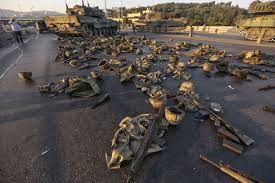 Their mission was to capture him—or more likely, to kill him.

The commandoes engaged in a fierce gun battle with the president's bodyguards, killing a number of them.

The president, however, was nowhere to be found. He'd been tipped off and made it safely to his private jet, cheating death by mere minutes.

When the renegade soldiers learned of his escape, they commandeered a couple of F-16 fighter jets and sent them to shoot down the presidential jet.

To escape the rebel F-16s, the president's pilots hid their aircraft's identity by altering its transponder signal, making it "look" like a civilian passenger jet.

The confused rebel F-16s ran out of fuel and had to land before they figured out what had happened.

This story sounds like something out of a Tom Clancy novel. But it actually happened last summer in Turkey. The failed military coup d'état killed over 290 people.