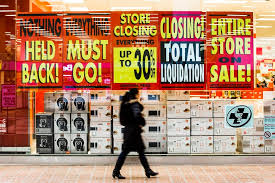 The retail industry— formerly a cornerstone of American economy and culture— is fading fast into the background, and taking millions of entry-level jobs along with it.

Chalk it up to the casualties of the rapidly growing e-commerce industry. Between 2010 and 2014, e-commerce grew at a rate of $30 billion dollars annually, and that figure has increased to $40 billion in the three years since.

Technology is changing the job landscape. In the United States, currently about 1 in 10 people work in retail— but not for long. Since October of last year, an estimated 89,000 Americans have been laid off from jobs in general merchandise. This is a higher number than all the people in the country who are employed by the coal industry.

Traditional brick-and-mortar stores are clearing out at a rate we haven't seen since the Great Recession in 2008. Shopping district displays have been replaced by vacancy signs, and many suburban malls and strip centers feel eerily abandoned.

Macy's, JCPenney, Kmart, Bebe, Sears, Payless, Crocs, BCBG, Abercrombie & Fitch and Guess are among the stores closing the doors on a major chunk of their locations. Many will revert to depending solely on internet sales.

Quartz reports, "Analysts at Credit Suisse count roughly 2,880 store closings announced this year through April 6. They note that about 60% of store closure announcements historically have come in the first five months of the year, so extrapolating from there, the bank estimates the year could bring more than 8,640 store closings in total."