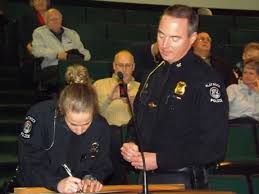 The Second Amendment to the U.S. Constitution allows for all citizens to protect themselves and their loved ones by granting gun ownership rights to all Americans. But over the years, those rights have been impeded by what seems to be a laundry list of requirements gun owners must meet in order to be able to actually carry their firearm on their person. In fact, if someone doesn't have a squeaky clean record, they're more than likely not going to be able to carry a firearm in many U.S. states. Fortunately, law abiding citizens are undeterred in their efforts to exercise their rights to carry a weapon for self-defense. But to describe the inequities that still exist, we bring to you two videos of encounters with police by Michigan residents who choose to exercise their rights to open and concealed carry.

The first involves what is reported to have taken place in Flat Rock, Michigan. Two men, one named "Doc" and another unidentified man, were carrying AR-15s, slung around their shoulders and walking down the roadside in broad daylight.

Of course, almost immediately, neighbors called police who quickly responded and approached the two men. After a brief explanation as to why the two men were walking down the road, armed with so-called assault rifles, the men were allowed to go on their way, as they were committing no crimes by openly carrying their firearms.

The difference between openly carrying and brandishing a weapon is when someone is brandishing their weapon, they're not only showing they have a weapon but are presenting it as if they're ready to open fire on someone or something. The differences, unfortunately, are left to the interpretation of the responding officers, who could determine if your weapon is in your hand then you're brandishing it. So care must be taken if anyone attempts to repeat what the two men were doing.

Orwell Tried To Warn Us About 1984 But No One Listened!