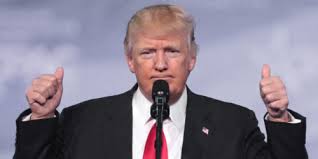 May 1, the president declared, should be a day "for the reaffirmation of loyalty" to the United States; and that fealty to this nation — obedient citizens are encouraged to display the Stars and Stripes — should usurp any recognition in unison with some 80 or so other countries of the struggles faced by workers around the world.

For as frighteningly nationalistic as the name implies, Loyalty Day is not Trump's brainchild.

In fact, once Loyalty Day garnered congressional approval in 1958, the oppressively patriotic holiday has been officially proclaimed by every president from Dwight D. Eisenhower in 1959 through Barack Obama — Trump just carried on its pretext "intended to replace" International Workers' Day.

Interestingly, Loyalty Day's history stretches back as far as 1921 — when the first Red Scare gripped the nation, and suspicions immigrants might not have America's best interests at heart similarly compelled an upswell of patriotism and vehement xenophobia.

It was the second Red Scare, however, when the holiday truly came into its own. Reports The Nation:

"In the fifties, Loyalty Day parades replaced May Day parades. If you Google 'Loyalty Day parade,' you get a quarter of a million hits. Long Beach, California, claims to have 'the longest consecutively running loyalty commemoration in the nation!' (Exclamation point theirs.) The Veterans of Foreign Wars started theirs in 1950, nine years before Ike's declaration. This year's Loyalty Day parade in Long Beach will be the same as always: high school marching bands, vintage cars, riders on horses and floats, as well as the required military color guard. Also clowns.

"The first May Day proclamation made the Cold War context pretty clear: 'Loyalty to the United States of America,' Ike said, 'is essential to the preservation of our freedoms in a world threatened by totalitarianism.' That was the idea: 'we' represented freedom, and 'they' were 'the enemies of freedom.' Of course, in 1959 our 'freedoms' included segregation for blacks and blacklisting for reds, and our 'Free World' allies included dictators and tyrants like Chiang Kai-Shek in Formosa, Marcos in the Philippines, the Shah in Iran and whoever was running South Korea."

WTG Jewboy. Get those goyim bowing down to the NJO.

This dope needs to be declared mentally incompetent and a public menace.

Christopher Steele finally admits his infamous dossier is not 100% true...

Donald Trump Built a National Debt So Big (Even Before the Pandemic)...

I am Just in the Way