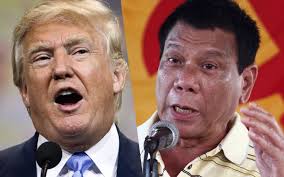 Part of noninterventionism in foreign affairs is refraining from using threats, sanctions, foreign aid, or military attacks to make the governments of other countries change their actions in their own countries. The United States government has drifted so far from adherence to this standard that much media coverage expresses distress and amazement, due to Philippines President Rodrigo Duterte's brutal domestic actions, that US President Donald Trump cordially spoke Saturday with Duterte in a phone call and invited Duterte to visit Trump at the White House.

Media stories express concern that Trump would talk to Duterte. Duterte is a killer in the drug war he has escalated in the Philippines the stories recount. But, as Trump noted in an early interview as president, the United States is not so innocent so far as killings go. Neither Trump nor Duterte will likely be changing their killing ways whether they talk or not

As far as the drug war goes, Trump, soon after becoming president, promised, in a Washington, DC speech to police, that he would pursue a "ruthless" drug war in America. Many people think the war on drugs has already been ruthless in America for decades as evidenced by the high incarceration rate, ramped up police power, and the "drug war exception to the Fourth Amendment" that the drug war has helped create. Yet, Trump wants the war escalated further, though, it seems, not so far as to include outright encouraging police and vigilantes to kill supposed drug dealers and users sans trial as in the Philippines.

A Sunday New York Times article by Mark Landler states in the first sentence that Trump is "embracing an authoritarian leader who is accused of ordering extrajudicial killings of drug suspects" by inviting Duterte to the White House. But, this is not necessarily the case. Having a meeting with someone is not the same as making a blanket endorsement of him. US presidents can and do meet with leaders of other countries with whom they have profound disagreements. Such meetings can, in fact, bring great benefits for peace by allowing the leaders, through communication, to prevent increasing discord or military tensions to escalate to war.

Consider President Ronald Reagan talking with and meeting in "summits" with Mikhail Gorbachev, the leader of the Soviet Union. The US and USSR had nuclear weapons ready to devastate the respective countries, yet the leaders talked cordially. Reagan had called the Soviet Union an "evil empire," but he knew war should be avoided.

Decades earlier, President John F. Kennedy exchanged correspondence with Soviet leader Nikita Krushchev to arrange a resolution to the Cuban Missile Crisis that had threatened war between to two nations.

The US has a less-than-stellar history of its presidents speaking with leaders of less powerful nations to prevent war. Consider, for example, Reagan's support for direct US military intervention in Libya and Grenada, plus aid to armed groups in conflicts in Latin America. Reagan's successor, George H. W. Bush even went so far as to direct the US military to invade Panama, justified in part on the desire to counter Panama leader Manuel Noriega's involvement in the drug trade.

The ensuing presidencies have delivered a continuing onslaught of US government intervention around the world, through means including sanctions, military attacks, and the funding and training of groups seeking to overthrow governments through both armed insurgencies and "color revolutions." Trump, despite campaign comment that many people hoped indicated he would take a more noninterventionist approach, has continued along this course, expanding US drone attacks, increasing the presence of US military forces in the Middle East and beyond, and launching a missile attack on a Syria military installation.

Offered in support of much of the US military intervention during the Trump administration and before has been a concept of humanitarian intervention — that the US should intervene abroad, including via military attacks and the aiding of armed revolutionaries, to stop abusive actions of governments against people in the territory the governments control.

To justify such intervention, US presidents, along with executive branch officials, Congress members, and media pundits (some of whom are former US military members since compensated by the military-industrial complex), will depict the leader of a targeted nation as a "monster." It happens again and again, from the depictions of Saddam Hussein of Iraq to Slobodan Miloševi? of Yugoslavia to Muammar Gaddafi of Libya to Bashar Assad of Syria.

Even if the "monster" label "fits," how does it justify the US advancing war and the monstrous results that arise from war? Often, as has been seen following US intervention in Iraq and Syria, the elimination of a "monster" or the attempt to eliminate one creates worsened conditions for the people in a targeted country, including death, destruction of and displacement from homes, elimination of sanitation and medical help, economic catastrophe, and the emergence or growth of other "monsters" such as the Islamic State (ISIS).

In 1821, then-Secretary of State John Quincy Adams stated the noninterventionist approach well in an address to the US House of Representatives. Adams said that America follows a sound foreign policy when "she goes not abroad in search of monsters to destroy" and instead "is the well-wisher to the freedom and independence of all" and "the champion and vindicator only of her own."