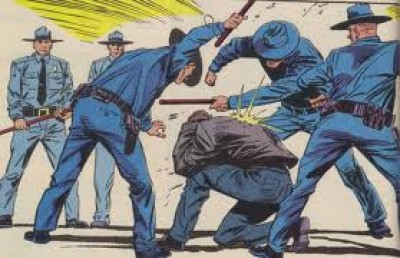 Police began to patrol the neighborhood around 11 p.m. on Saturday, April 29, 2017. There was a report of a dispute at a house party in the Dallas, Texas suburb of Balch Springs.

Prompted by a call from a neighbor's son, police arrived to investigate a confrontation over the neighbor's blocked driveway, as well as possible underage drinking at the house party on Baron Drive.

But within sixty-six minutes, yet another person was executed by a law enforcement officer.

That person was fifteen-year-old Jordan Edwards.

Jordan Edwards was shot by one of the responding cops, Roy Oliver, as he left the party with his two brothers and two friends in a black Chevrolet Impala.

Your initial response to these details is important. In fact, without any further information about the incident, your visceral reaction to the chronology of events as outlined above might well convey more about your understanding of politics than you think.

"In the eyes of our self-exalted rulers, all of us are criminals who fall short of the glory of the State, and are in proper peril of being detained, shackled, caged, or summarily killed by those who give tangible form to the State's abstract righteousness," he wrote.

In response to what Will observed as an instinctive barbarism emerging among the "Mundanes" – that is, everyone outside of the Blue Lives Matter cult – he developed the "Tom Joad Test."

It is a simple thought experiment that is both forthright and revealing in its application.

Although he was not a fan of the author for reasons mainly unrelated to the literature itself, Will developed the Tom Joad Test based on John Steinbeck's character in The Grapes of Wrath. He pointed out "…there is substantial merit in Joad's pledge to sympathize with those who are victims of Power," exemplified by Joad's famous statement that, "Wherever there's a cop beatin' up a guy, I'll be there."

Will concisely formulated the test:

"In assessing any act of police violence, I believe it's wise to apply what I've called the 'Tom Joad Test': When you see a police officer beating or shooting a citizen, is your first impulse to sympathize with the uniformed assailant, or the victim? If the former is the case, you're a natural authoritarian; if the latter is true, you're an instinctive libertarian."

Revolt of the Delivery Workers

Paris police beat woman who tried to go shopping at the mall without a vaccine passport.

'They had my 11-year-old daughter at gunpoint':

Real Talk: How they Fight and What You Can Expect- Intimidation Tactics