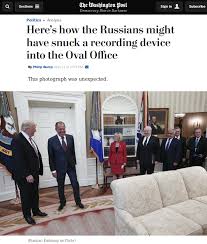 When President Donald Trump fired James Comey as director of the FBI on Tuesday, the move immediately sparked controversy. Some saw in the dismissal an attempt to hinder the FBI's investigation into possible ties between Russia and his presidential campaign. It didn't help that Trump and Secretary of State Rex Tillerson hosted the Russian foreign minister, Sergei Lavrov, and Russian Ambassador Sergey Kislyak in the Oval Office the very next day—or that the only photos of that meeting came from the Russian-sponsored news agency Tass.

The White House says it didn't realize the government photographer who accompanied Lavrov to the meeting was also a journalist; it had barred US media from the meeting. And while the incident provoked unfounded speculation that the visitor could have brought sensing and listening devices into the meeting, or even planted a bug in the Oval Office, it mostly underscores the consistently careless manner with which the Trump administration regularly treats security.

The Spy's the Limit

US government facilities have certainly been bugged by foreign adversaries at times. As recently as 1998, for example, the State Department discovered that a Russian spy had bugged one of its conference rooms. While there's no indication that the photographer fulfilled the Twitter commentariat's wildest conspiracy theories, analysts agree that he could have attempted to compromise White House security in countless ways. And that's not even to mention the lack of proper vetting that allowed him entry in the first place.

"It's a security breach for sure, because they should know exactly who's in the White House," says Jill Johnston, president of KJB Security Products, a security and surveillance device wholesaler. "He could have recorded everything that went on there. He could have definitely left something behind."

Recording the conversation in the moment wouldn't have posed much of a challenge; any smartphone or voice recorder could do that. No fancy spy stuff needed. For a more sophisticated takeaway, he could have also hidden a

Amazon's Latest Gimmicks Are Pushing the Limits of Privacy

MASS Surveillance Is HERE! - Many Americans RECORDED 1,000 TIMES Per Week!