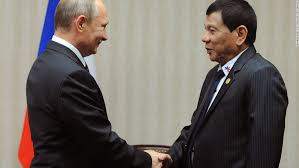 (CNN)Philippines President Rodrigo Duterte will depart on an official five-day visit to Moscow Monday, as part of an effort to realign his country's foreign policy away from longtime ally the United States.

Under Duterte, who took office in June 2016, the Philippines has made overtures toward Beijing and Moscow -- seeing the countries as a source of much-needed investment -- and away from the US.

In a pre-departure speech Monday, Duterte hailed the visit as the "writing of a new chapter in the Philippines-Russia relationship," describing it as a chance to "correct" the "strategic oversight" of previous Filipino leaders.

"There are opportunities of cooperation that cannot be ignored" said Duterte. Reiterating his "firm resolve to broaden the horizons for friendship," Duterte highlighted Russia's "geographic footprint" as well as its "strategic interest in the (Asia Pacific) region" as reasons for extending cooperation between the two countries.

Relations between the Philippines' traditional ally, the US, have been strained. Last year Duterte lashed out at former US President Barack Obama amid reports the US was canceling an arms deal over alleged human rights abuses.