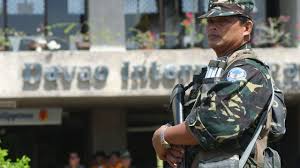 he move has already drawn flak as being an over reaction from many quarters, including church leaders.

The president placed all of Mindanao's 27 provinces and 33 cities, roughly a third of the country, under martial law for a period of 60 days.

Mindanao is home to an estimated 20 million people.

The martial law announcement came after dozens of fighters from the Maute terror group entered Marawi, a predominantly Muslim city of about 200,000 people, earlier on May 23.

The group, which has vowed allegiance to the Islamic State and has been clashing with security forces in recent months, took over a hospital, a Catholic cathedral, and a Christian school.

A hospital, the city's jail, and several other establishments were also taken over by the gunmen.

Initial reports received by ucanews.com said Father Teresito Suganob, vicar-general of the Prelature of Marawi, and several staff of St. Mary's Cathedral, which was set on fire, were taken hostage.