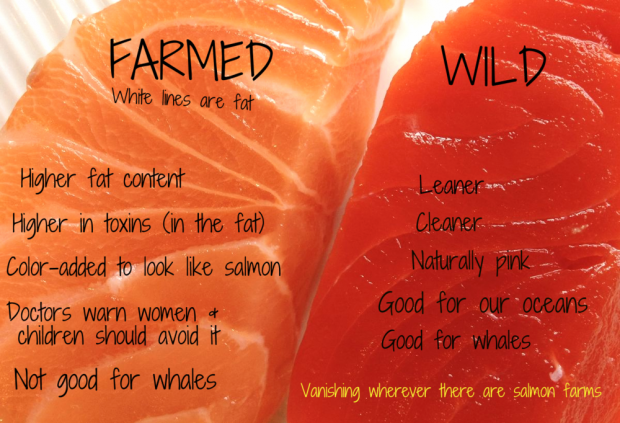 Aquaculture is often celebrated as a sustainable solution to overfishing, but in reality, farmed salmon may be one of the most toxic foods in the world. As a result of overcrowding, disease, pollution and low quality fishmeal, the resulting salmon meat is often contaminated and can lack the valuable nutrients of wild-caught salmon.

Worldwide, due to growing awareness of the environmental and health impacts of red meat, people have begun to favour white meat and fish. As a result, the aquaculture industry is suffering from the growing pains of high demand, and subsequently has been accused of procedures seriously compromising fishmeat quality. One of the biggest threats facing fisheries today is the alarming epidemic of parasitic sea lice. Lice attach to fish and drain their blood. Just a few lice are capable of killing a full grown salmon, and unless the carcass is removed, it will decompose and subsequently contaminate live fish. Often, sea lice propagated in crowded, open-net fisheries spread to infect and kill wild salmon.

Fisherman attempt to treat salmon for lice by mixing a solution into their bath, sometimes hydrogen peroxide or often emamectin benzoate. Residues of these chemicals have been found in "higher than permitted" levels in salmon, and emamectin benzoate is known to interfere with the human nervous system. Some fisheries have begin to introduce cleaner fish, which feed on sea lice and offer a biological solution to reducing lice outbreaks.

Kamala Harris wants to dictate the food on your plate, resume war on American ranchers