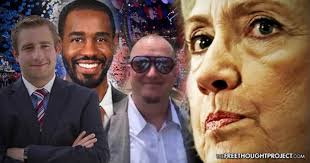 While the rest of the United States seems fixated on this week's Senate hearing testimony of U.S. Attorney General Jeff Sessions (to discuss his involvement in the pseudo-scandal which is the meddling of the Russians in the presidential election of 2016) lawyers suing the DNC for fraud have asked for special protection for their lives.

The sheer number of plaintiffs are too many to mention in this article. The original motion to sue the Democratic National Committee and Debbie Wasserman Schultz can be seen by clicking here. They allege, thanks to leaked DNC emails published by Wikileaks, that the DNC and former Chairwoman Wasserman-Schultz actively discriminated against Senator Bernie Sanders as a DNC candidate.

All the plaintiffs who contributed to Sanders' campaign, are members of the Democratic Party, and allege the DNC committed fraud by actively working against Sanders to help Hillary Rodham Clinton win the Democratic nomination as a presidential candidate. But that's just the beginning. Now they're saying they're in fear for their lives, and they've described the strange things happening to some of them.

On Tuesday, six plaintiffs filed requests for special protection. Carol Wilding of Dassel, MN, a plaintiff in the case, filed a motion for special protection services. She stated in court documents someone tampered with her laptop. The computer had been moved from the mud room to the living room and placed on an end table, something she says she wouldn't have done since she has special needs.

Once Upon A Presidency - From Populist To Dissident

The Collapse Of Red Vs. Blue

Democrat hypocrisy: Pelosi allows Democrat with coronavirus to go to the Capitol to vote for her

Guest Post: The Tyranny of Medical Inventions by Wyotona