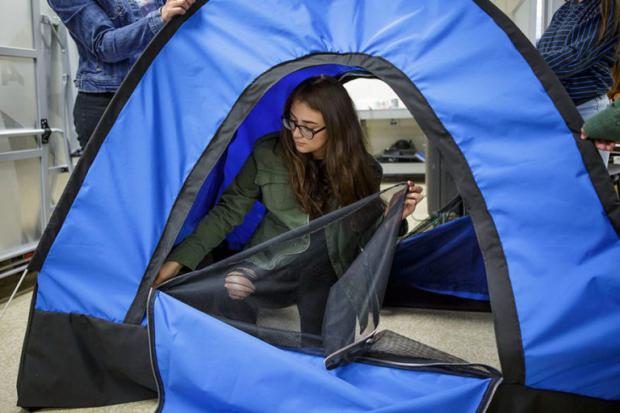 Due to a flailing economy, homelessness is on the rise in cities such as Los Angeles. Fortunately, a new innovation developed by students at San Fernando High School may help those who are stranded on the streets — at least until a more permanent solution is presented.

Bored Panda reports that with absolutely no experience, a group of young females invented a solar-powered tent that rolls up into a backpack. Together, the 12 females were recruited by DIY Girls, a non-profit organization that empowers young women from low-income families in LA to pursue fields in technology and engineering. Overseeing the project was executive director of DIY Girls, Evelyn Gomez.

The girls primarily used YouTube videos and information found via Google searches to produce a tent that offers major benefits to homeless individuals. Throughout the process, they learned skills such as sewing, coding and 3D printing.

Fortunately, their hard work paid off. Not only did they win the world's respect, the team won a $10,000 grant from the Lemelson-MIT program. In result, they will present their invention at MIT's EurekaFest on June 16th. Because the high school students come from low-income families, they almost couldn't afford the trip. Compassionate strangers, friends, and family members, however, donated to a GoFundMe campaign that raised over $18,000. Now they can go and enjoy their time in the well-deserved spotlight.

It's a deserved victory for the twelve teenagers who are making a positive difference in the lives of others.