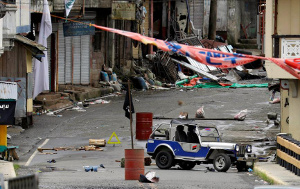 Zia Alonto Adiong, a Philippine politician who spoke to civilians fleeing the city of Marawi, says that the witnesses reported seeing scores of dead bodies, at least 100, scattered around the roads in the area where the fighting is ongoing, raising concerns that the death toll in Marawi is likely much larger than officially reported.

Marawi was seized by the local ISIS affiliate about a month ago, and heavy fighting has been ongoing since to recover, or destroy, the city of 200,000 people. Officially 290 people have been killed in the fighting, but the bodies littering the streets appear unaccounted for in that figure.

The fighting in Marawi early on was slow, and allowed the vast majority of the civilian population to safely flee the area. Those trapped within specific areas, however, have been unable to get out, and amid growing airstrikes and ISIS snipers, many are not able to evacuate safely.