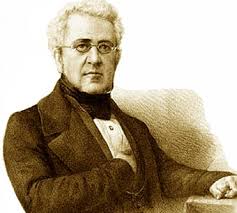 When recalling notorious Mexican politicians, a string of populists, socialists, and fame-seeking warlords come to mind; each one elevated to worshipful status because of how they addressed a manufactured crisis. You know, because people of the plundering ilk write the official history books. It's the same reason that people list the biggest thieves and warmongers as the "best" U.S. presidents.  Consequently, many have heard names like Benito Juarez, Pancho Villa, and Miguel Hidalgo. But, few have heard of Lucas Alamán.

Benito Juarez is revered for ending the widespread church practice in Mexico of settling disputes amongst its members in private courts. He turned the function over to the state. Juarez is also praised for implementing the "Law of Nationalization of the Ecclesiastical Wealth" which seized church property.

Priest Miguel Hidalgo was defrocked for violating his vows by fathering several illegitimate children and raising an army to sack propertied Spaniards. He is, of course, revered for this life of service.

Alamán, to the contrary, supported private courts and the church's dispute-resolution functions. He saw the church as performing an important function in Mexican life that should not be usurped by the state. He also strongly opposed the plunder and destruction wreaked upon Mexico by Father Hidalgo's 100,000-man roving mob.  He refused to believe that Father Hidalgo's bloody campaign was necessary to bring a peaceful independence from Spain saying that it was a "monstrous merging of religion with murder, plunder, and screams of death and desolation that I heard thousands of times in my youth and that I still hear as a dreadful echo in my ears."

He criticized Hidalgo for supposedly trying to bring about independence, but with no predetermined plan by merely using disorder and violence. He said that Hidalgo was grossly irresponsible and had pushed Mexico over the precipice into the abyss of a violent war that destroyed much of the productive capability of the country making it extremely difficult to bring about reconstruction.

In Mexico deaths were 50% higher for 8 months, then it starts Ivermectin…

Mexico bans GM corn, plans to phase out imports and the use of Monsanto's glyphosate