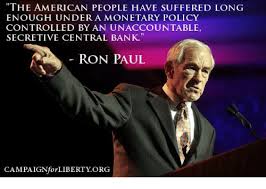 The global dollar-based monetary system is in serious jeopardy, according to former Texas Congressman Ron Paul. And contrary to Fed Chairwoman Janet Yellen's assurances that there won't be another major crisis in our lifetime, the next economy-cratering fiat-currency crash could happen as soon as next month, Paul said during an interview with Josh Sigurdson of World Alternative media. Paul and Sigurdson also discussed false flag attacks, the dawn of a cashless society and the dangers of monetizing national debt.

Paul started by saying Yellen's attitude scares him because "central bankers are always wrong – especially before a bust."

"There is a subjective element to when people lose confidence, and when is the day going to come when people realize we're dealing with money that has no intrinsic value to it, we're dealing with too much debt, too much bad investment and it will come to an end. Something that's too good to believe usually is and it usually ends. One thing's for sure, we're getting closer every day and the crash might come this year, but it might come in a year or two."

"The real test is can it sustain unbelievable deficit financing and the accumulation of debt and it can't. You can't run a world like this, if that were the case Americans could just sit back and say "hey, everybody wants our money and will take our money."

Paul advised that, for those who are already girding for the crash by buying gold and silver and stocking their basements with provisions like canned food and bottled water, the rewards for their foresight will only grow with the passage of time.

"Actually, the longer it takes to hit, the better it is for us. The more we can get prepared personally, as well as warn other people, about what's coming."

"It's a sign that the authoritarians are clinging to power so they can collect the revenues collect the taxes and make sure you're not getting around the system. That's what the cashless society is all about. But it won't work in fact it might be the precipitating factor that people will eventually lose confidence when the crisis hits. They say the crisis hasn't come – welI in 2008 and 2009 we had a pretty major crisis and what we learned there is that the middle class got wiped out and the poor people got poorer and now there's a lot of wealth going on but it's still accumulating to the wealthy individual."

"People say it might not come for another ten years – well we don't know whether that's necessary but one thing that's for sure when a government embarks on deficit financing and then monetizing the debt the value of commodities like gold and silver generally goes up.

Asked about intelligence agencies and their growing willingness to stage so-called false flag attacks to help push their hidden agendas, Paul asserted that the gassing of a village in Northern Syria – an attack that was widely blamed on Assad – was in reality orchestrated by his political opponents to try and goad the US into escalating its campaign of violence against Assad's regime. The tactic that was ultimately successful, inspiring US President Donald Trump to fire a fusillade of cruise missiles at a Syrian airstrip.