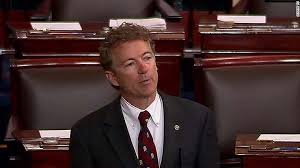 Republican Senator Rand Paul hit out at GOP healthcare legislation Sunday, warning that the bill isn't a repeal and keeps the "fundamental flaw" of Obamacare.

"It keeps the insurance mandates that cause the prices to rise, which chase young, healthy people out of the marketplace, and leads to what people call adverse selection, where you have a sicker and sicker insurance pool, and the premiums keep rising through the roof." the Senator urged.

Paul noted that while Republicans have complained ad nauseum about Obamacare, they still intend to keep its core intact in their bill, expected to be further debated this week.

"And the reason you know Republicans acknowledge this is, they make a giant insurance fund to subsidize those prices." Paul said.

"Basically, they're subsidizing the death spiral of Obamacare." the Senator exclaimed.

"So, for all Republicans' complaints about the death spiral of Obamacare, they don't fix it. They simply subsidize it with taxpayer moneys, which I just don't agree with at all."

Is the Establishment Still Terrified of Trump?

Expulsion from the United States Congress

Is The Establishment Still Terrified Of Trump?

Enemies, a Love Story: Inside the 36-year Biden and McConnell Relationship