> Welcome to the Era of Artificial Intelligence and - Freedoms Phoenix 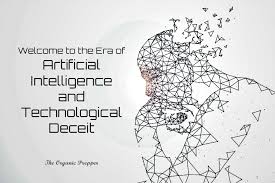 The era of artificial intelligence and technological deceit is upon us. If you think "fake news" and propaganda is bad right now, just wait.

And you won't have to wait very long, at that.

Pretty soon, computer wizardry and artificial intelligence will allow video footage to be created that is practically indiscernible from the real deal. Add to this holograph technology, and soon, a person could appear to be speaking, live, in front of you, and you'd never even know it was all fake. The ethical ramifications of AI and technology are simply mind-boggling. In fact, some folks even believe it will signal the beginning of the end of humanity.

But apocalyptic AI aside, let's look at the manipulative potential of our current tech. We are very close to real life meeting science fiction, and if you think we are being deceived now, once these technologies are rolled out, you won't be able to believe your eyes or your ears.

There are several unsettling parts to this story.

First, there's the video editing to a new soundtrack.

Researchers at the University of Washington have developed an artificial intelligence software so powerful that it can put words in the mouth of just about anybody. It's basically like artificially intelligent lip-synching.