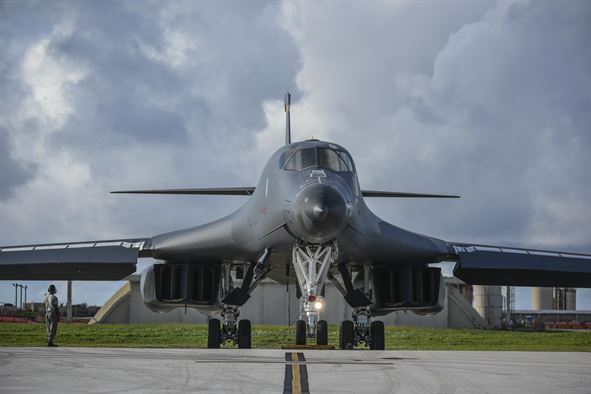 It appears things are starting to move fast...

This serves as the first mission for the crews and aircraft recently deployed from Ellsworth Air Force Base, South Dakota in support of U.S. Pacific Command's Continuous Bomber Presence missions.

After taking off from Andersen Air Force Base, Guam, the B-1s assigned to the 37th Expeditionary Bomb Squadron, flew to Japanese airspace, where they were joined by Koku Jieitai (Japan Air Self Defense Force) F-2 fighter jets. The B-1s then flew over the Korean Peninsula where they were joined by Republic of Korea Air Force KF-16 fighter jets. The B-1s then performed a pass over the Pilsung Range before leaving South Korean airspace and returning to Guam.

Throughout the approximately 10-hour mission, the aircrews practiced intercept and formation training, enabling them to enhance their combined capabilities and tactical skills, while also strengthening the long standing military-to-military relationships in the Indo-Asia-Pacific region.

Ellsworth B-1s were last deployed to Guam in August 2016 when they took over CBP operations from the B-52 Stratofortress bomber squadrons from Minot AFB, North Dakota, and Barksdale AFB, Louisiana.

"How we train is how we fight and the more we interface with our allies, the better prepared we are to fight tonight," said a 37th EBS B-1 pilot. "The B-1 is a long-range bomber that is well-suited for the maritime domain and can meet the unique challenges of the Pacific."