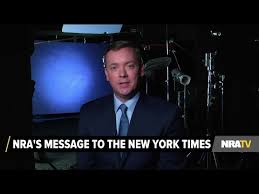 The election of President Donald Trump and Republican control of Congress meant the National Rifle Association could probably rest easy that gun laws wouldn't change for at least four years.

But even though Republicans have control in the government, they don't have control of the narrative being pushed in the media.

The NRA has begun a campaign not against pending legislation but what it sees as liberal forces bent on undoing the progress it's made.

Using the hashtags #counterresistance and #clenchedfistoftruth, the NRA has put out a series of videos that announce a "shot across the bow," and say the gun-rights group is "coming for you" and that "elites … threaten our very survival."

"The times are burning and the media elites have been caught holding the match," NRA spokeswoman Dana Loesch says in one video aired on NRATV, the gun lobby's web video site, as it shows footage of people fighting police, breaking storefront glass and burning the American flag.

Later, she specifically calls out The New York Times: "We've had it with your narratives, your propaganda, your fake news. We've had it with your constant protection of your Democrat overlords, your refusal to acknowledge any truth that upsets the fragile construct that you believe is real life. And we've had it with your tone-deaf assertion that you are in any way truth or fact-based journalism," Loesch says. "Consider this the shot across your proverbial bow. … In short? We're coming for you."

The NRA is taking a page from the Trump playbook.

The friction between the gun lobby and the media isn't new. But critics of the NRA contend the organization is relying on the "fake news" mantra started by Trump to whip up its followers after a dip in gun sales that has taken place since Trump succeeded President Barack Obama, who favored stricter gun-control laws.

"They're not inventing this hyper-angry, nasty partisan tone but piggybacking on Trump's approach. Of course, NRA voters by and large are Trump voters, so they would be sympathetic to that kind of message," said Robert Spitzer, chairman of the political science department at State University of New York at Cortland, who has examined the firearms industry and Second Amendment issues extensively.

Spitzer, a member of the NRA as well as the Brady Center to Prevent Gun Violence, said it's a pattern the NRA has exhibited as the group evolved from an almost exclusive focus on gun safety into a political beacon for conservatives who fear changes to the Second Amendment and the gun industry.

"It was Bill Clinton in the 1990s. In the early 2000s, it was John McCain. It was Hillary Clinton. It was the United Nations. They've held up the U.N. as ready to swoop in and take everybody's guns," Spitzer said. "The focus of their ire has changed, but the basic message has been the same."

Me and the NRA

The N.R.A. and Wayne LaPierre's Next Foe: One of Their Own