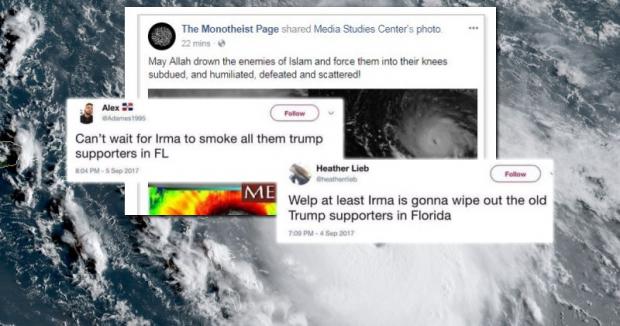 Here's yet another thing that the far-left and ISIS have in common; They're both celebrating the devastation about to be caused by Hurricane Irma.

According to screenshots and captions provided by Memri, "Pro-ISIS users on social media….are eagerly awaiting the destruction that (Hurricane Irma) is likely to cause."

"May Allah drown the enemies of Islam and force them into their knees subdued, and humiliated, defeated, and scattered!" commented one pro-ISIS Facebook page.

"Irma is very powerful and most destructive hurricane will hit USA in few Hours. This is Power of Allah," said another.

"Due to the threat of storm millions of people from Florida are displaced from their homes. O Crusaders! This is the reward of your crimes against Muslims. Do not forget it," added another.

In fact, the only group of people who seemed more gleeful about the divine retribution about to be dished out by Hurricane Irma were….you guessed it – leftists.

Hysterical anti-Trump mouth-breathers are all over Twitter praying for the hurricane to ruin the lives of Trump supporters in Florida.

"I hope Irma leaves all these Trump supporters homeless and humble their asses," remarked a Twitter user called Jason.

"We should round up all the Trump supporters and leave them directly in Hurricane Irma's path," added another Twitter user.

"Hurricane Irma needs to land directly on the America where all of Trump and his supporters are so we can rejoice to mother nature," said another.

Is It Safe to Go Out In Public?

We Talked to Experts About Iran's Cyberwar Capabilities

General Soleimani's Daughter: Families of US Forces in West Asia Should Worry from Now On

PREPARE for Iran to activate terror cells across America and attack the power grid, water supplies

1 US service member, 2 DOD contractors killed in terror attack on US base in Kenya

It Doesn't Have to Be This Way