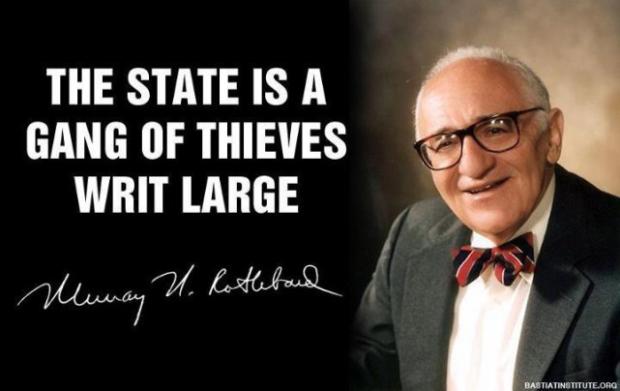 The following is an overview and summary, with little contribution of my own, of David Gordon's three part series (part 1, part 2, part 3) on the relationship that Murray Rothbard had with the Koch Brothers. To understand the libertarian movement is immensely beneficial for the libertarian at all stages of development. It teaches the nuances in theory and strategy that have developed over the years and it explains where the present state of the liberty movement came from. The Gordon essay is classic Gordon. Extremely helpful, packed full of incredible detail, and uses the past struggles of Rothbard to explain current themes in the liberty movement.

The only problem, of course, is that it is long: three essays. I have tried hard to make the following overview engaging, short, and complete; and of course, true to Gordon's telling of the story. Murray Rothbard was the founder of the modern libertarian movement, the chief developer of the theory and the synthesizer of libertarianism as an ethical-political theory with Austrianism as a value-free science of economic thought. His story needs to be told; not just because of what happened to him –for old wounds can and do heal– but because it explains why and how libertarianism as a movement is not just a uniform thing. There are factions. There are lessons. There are very good reasons why the libertarianism of mainstream approval is not the Rothbardianism of the 1970s, 80s, and 90s.

Something happened. Here is the story.

Why is it that, among "beltway libertarian" Cato Institute leaders, there seems to be a sense of hostility toward the Mises Institute? Many new to libertarianism have even asked why Ron Paul, who is well known to be closely associated with the Mises Institute, is almost never even mentioned favorably at the Cato Institute, Reason Magazine, and so on. Apparently, these two factions (see my piece here for more on the characteristics of the two types) of libertarians don't get along very well.

And yet, as David Gordon writes, "someone acquainted only with these facts would never suspect that Rothbard was a principal founder of Cato and that the organization had been established to promote his distinctive variety of libertarianism." That's right; Murray Rothbard's thought was the reason and motivation for the establishment of the Cato Institute, which now almost never mentions him, much less his work. And indeed, amongst Cato's directors and decision makers, there is a flavor of bitterness not only against Rothbard, but also against Lew Rockwell and the Mises Institute.

To explain what happened, we will start, as Gordon does, with the Koch brothers (for more on the intriguing– and it really is intriguing– story of the Koch family, I highly recommend Daniel Schulman's book from last year Sons of Wichita: How the Koch Brothers Became America's Most Powerful and Private Dynasty). The "Koch brothers," commonly refers to Charles and David Koch. They are the two of four sons who inherited and vastly expanded the business started by their father, Fred. For our story, only Charles and David are important. As Gordon notes, the two brothers got their interest in political and economic matters from their father who was heavily involved in the establishment of the (in)famous conservative John Birch Society and in various anti-communist activities before he died.

During his schooling, Charles stumbled upon the work of Murray Rothbard and eventually decided to use a piece of his billion-dollar wealth to fund an organization dedicated to promote libertarian ideas. In fact, Charles was so enthusiastic about Murray that Murray was one of the four original stockholders of the organization, along with another important character of the story, Ed Crane; of course, Charles was the majority stockholder. It should also be mentioned that the Koch empire was behind the creation of Reason Magazine, Institute for Humane Studies, Students for Liberty, George Mason University's economics think tank "The Mercatus Center," and Americans for Prosperity.** Due to Koch money and influence behind so many nominally libertarian groups, this empire soon began to be referred to as the "Kochtopus."

Nevertheless, the organization that the Kochs started for the advancement of Rothbardianism and Austrianism was founded as the Cato Institute in 1977. The name, which was Rothbard's idea, was based on the 18th century Cato Letters. Rothbard, naturally, was thrilled. Here was the reward for decades of tireless and lonely efforts to carry forward the dying flame of Misesian economics. For years Rothbard was nearly alone in his appreciation for the Austrian school and his gloriously stubborn dedication to the strict property rights theory of liberty. But, finally, an organization which could host him and advance the message to the next generation.

Unfortunately the problems started early. Charles Koch had hired Ed Crane to run the day to day operations of Cato, and Rothbard to lead the intellectual and academic development. Crane's pragmatism-over-principle mentality on growing Cato led him to both downplay the organization's goal of developing the intellectual content of a libertarian think tank (the reason Cato was started in the first place) and, later in the story, to dismiss the academic contributions of Rothbard and his scholars as a mere distraction. The head of Cato's Inquiry magazine Bill Evers, was berated by Crane for focusing too much on the development of ideas and not enough on gaining influence in Washington. Here, we see a glimpse into the future of the pragmatist vs. principled debates that flourish in the libertarian movement even today.

While Murray Rothbard, intellectual that he was, put far more emphasis on the ideas and therefore sided with Evers, Crane was on the phone daily with Charles Koch back in Wichita, who, having the money and the majority ownership, called the shots. To understand the severity of the tension between Evers/Rothbard and Crane/Koch, consider Gordon's comments:

I later learned that Crane's impatience with intellectuals extended to Rothbard himself. Crane evidently believed that books were like automobiles, to be produced assembly line fashion. Rothbard had received a grant to write Ethics of Liberty, but Crane was not satisfied with Rothbard's progress. Rothbard was an incredibly fast writer, but, as Crane did not grasp, it takes time even for someone of Rothbard's speed to read and think about the relevant material. He demanded results; on one occasion, I have been reliably informed, Rothbard had to seek refuge in a closet to escape his verbal barrage. Was not Ethics of Liberty worth the wait?

In the context of this tension, things began to break when Rothbard discovered that the decision had been made to hire David Henderson, who was not an economist in the Austrian School, but rather, leaned far to the Chicago School. This was a very important event in the unfolding of Rothbard's relationship with the Cato Institute because the entire mission of Cato in the first place was to give Rothbard an outlet to advance the Austrian vision. Thus, with one hire, the purity of the entire academic message of Cato became heavily compromised and contradictory. Of course, fast forward decades after and, as Gordon notes, "[i]n the years since Rothbard's break with Cato, the Institute has no longer supported the abolition of the Fed. Quite the contrary, the Institute now endeavors to attract high officials of that organization to participate in its seminars and conferences. The aim now is to influence policy in Washington. Legislators who wish to restore the gold standard, Ron Paul chief among them, are shunned and defamed."

The next step in the flaring tensions were the political efforts of Crane and Koch in 1980. They went all in for LP candidate Ed Clark (Ed Clark not Ed Crane–confusing, I know). With Koch's money behind him (David Koch joined Clark on the LP ticket so that the entire campaign could be paid for using the Koch's own money), Clark sought to make libertarianism go mainstream. To this end, Koch and "Crane believed that he had to conceal aspects of the libertarian program that many voters would consider extreme" in order to achieve much more popular support. Gordon:

Under [Crane's] guidance, Clark campaigned for a reduction in government welfare spending rather than its total elimination. Rothbard saw matters differently. For him, libertarianism was a coherent system of ideas that a libertarian candidate ought fully to embrace. He had his own political group, the Radical Caucus, on which Evers and Justin Raimondo were leading lights. As its name suggests, the Radical Caucus favored a much more confrontational approach to politics than did Crane. For Rothbard, the last straw was Clark's depiction of himself as a "low-tax liberal." Rothbard in his privately printed publication Libertarian Forum assailed this as a betrayal of libertarian principle: Clark, after all, was campaigning as an explicit libertarian. Rothbard would not have objected to a self-consciously "moderate" policy of tax and welfare reform had these been part of a Constitution Party platform. But the candidate of the Libertarian Party, he thought, must embrace libertarianism in uncompromising form.

In short, it was due to the positioning of Koch and Crane, through the person of Ed Clark, that Gary Johnson is now misconstruing libertarianism as "fiscally conservative and socially liberal." Herein lie the roots. Rothbard was furious. And understandably so! Here were the big dogs of the Cato Institute, an organization that was meant to promote Rothbardian Austro-libertarianism, preaching a false and distorted version of libertarian ideas.

The underlying differences here are obvious and therefore the problem was festering far deeper than just a disagreement over a silly campaign. Rothbard emphasized and stressed the need for scholarship and developing the ideas; Crane and Koch, however sought to "secure the audiences" of power groups and those closely knit to Washington's culture. The brewing fight was journaled in Murray Rothbard's own and separate newsletter that was in print from 1969-1984: The Libertarian Forum. Here was Rothbard's independent outlet, free from the chains of the Kochtopus and Charles' strict oversight of PR related matters. It was here that Rothbard was able to announce to the libertarian world the true roots of the problem between the Koch/Crane faction and the Rothbardians.

As Rothbard became frustrated with the "low tax" liberalism of Ed Clark and the corruption of the wonderful libertarian message, it was quickly revealed the extent to which Koch and Crane much more preferred the popularity goals of libertarianism and less the ideas themselves. In fact, as Gordon reports, Crane himself seemed unable to care less at times about the development of the scholarship; often being annoyed at the amount of energy Rothbard put into understanding the material and developing the system compared to zipping out sub-par content like a machine in order to attract more funds. The dynamic between Crane and Koch too fostered the problem. Crane wanted power and acceptance in Washington; Koch wanted control over the organization's every decision — this became the perfect setup to allow a variety of compromise of libertarian principle and theory. After all, Crane would deny any Rothbard suggestion that compromised popularity among status quo political opinion and Koch ensured Rothbard didn't have any authority to "mess things up."

By C.Jay Engel
Editor and creator of The Reformed Libertarian. Spends his day as an investment advisor and helping people with their financial strategies. Living in Northern California with his wife, he writes on everything from politics to theology and from culture to economic theory. You can send an email to reformedlibertarian@gmail.com