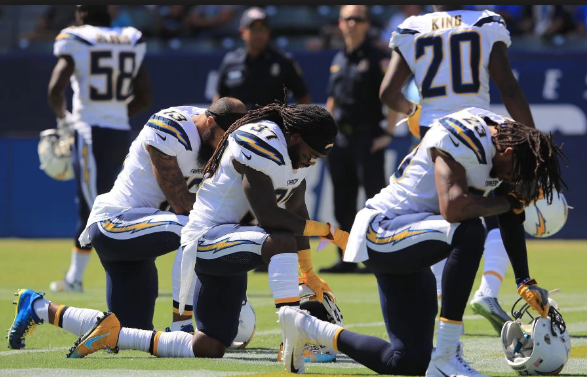 Los Angeles (AFP) - A wave of protests swept across the National Football League on Sunday as President Donald Trump escalated his feud with players who kneel during the US national anthem to draw attention to racial injustice.

Trump ignited a firestorm of criticism after comments on Friday in which he described NFL players who chose to take a knee through renditions of "The Star-Spangled Banner" as "sons of bitches" who should be fired.

The US leader doubled down on those remarks early Sunday, urging fans to boycott the NFL as long as the protests continued.

"If NFL fans refuse to go to games until players stop disrespecting our Flag & Country, you will see change take place fast. Fire or suspend!" Trump wrote on Twitter.

Yet players throughout America's most popular sport took a defiant stance on Sunday, kneeling, linking arms or raising clenched fists during the anthem.

Around 130 players could be seen kneeling in the 13 games that took place Sunday, easily the largest such demonstration since former San Francisco 49ers quarterback Colin Kaepernick began protesting in 2016.

The first mass demonstration took place at the NFL's London game between the Jacksonville Jaguars and Baltimore Ravens at Wembley Stadium, where a large number of players from both teams knelt.

In Nashville, neither the Seattle Seahawks nor the Tennessee Titans took to the field to observe the national anthem.

"We will not stand for the injustice that has plagued people of this color in this country," Seattle players said in a statement just prior to kickoff.