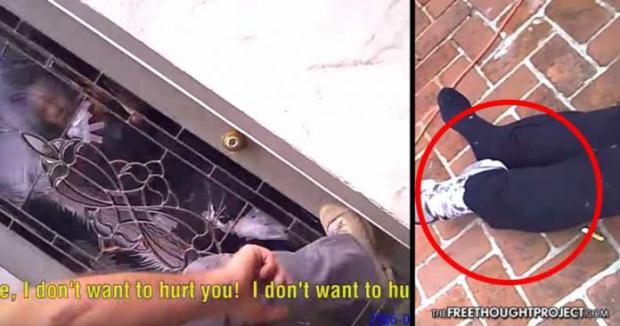 The taxpayers of Santa Clara will be shelling out a massive $6.7 million to settle a federal civil-rights lawsuit that was entirely preventable had a rogue cops not decided to violate their oaths and kick down the door of a family's home—with no warrant.

On April 12, 2016, Danielle Burfine was in her home when multiple Santa Clara officers came to her door and demanded entry into her home to arrest Burfine's 15-year-old daughter. They had no warrant.

Instead of simply going back to a judge and obtaining a warrant to constitutionally arrest the young woman, Sergeant Gregory Hill took it upon himself to kick down their front door. Because Burfine was attempting to prevent the officers from entering her home without a warrant, she was thrown down, causing her to hit a stone pillar which broke her leg, according to the lawsuit.

As the video begins, Hill and Burfine are involved in a standoff as the mother refuses to allow the officers in her home until she sees a warrant. Santa Clara police claimed they had a right to enter the home of the teen on the basis of "on-view charges." This term typically refers to a crime or evidence that an officer witnesses directly. However, the alleged crime was over a week old by this time, so it did not apply in this instance.

Black Lives Matter, But Not to Everyone, Part 1