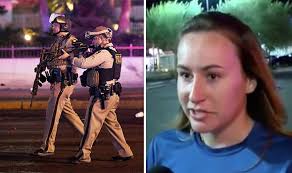 An eyewitness claims a woman at the music festival warned, "You're all going to die tonight," forty-five minutes before the shooting began.

Las Vegas, NV – In what is now being deemed the deadliest mass shooting in US history, at least 50 people are confirmed dead and over 400 people have been sent to area hospitals, after a gunman, identified as 64-year-old Stephan Paddock, opened fire on concert-goers during a music festival.

The mass shooting took place at the Route 91 Harvest country music festival across the road from the Mandalay Bay hotel, on the south side of the Las Vegas Strip.

Interestingly, an interview with a witness raises startling questions, as the eyewitness claims to have seen a woman push her way to the first row of the concert roughly 45 minutes before the shooting began and levy threats indicating that everyone would soon be dead.

"So there was a lady who pushed her way forward into the first row and she started messing with another lady. She told us we were all going to die tonight – it was about forty five minutes before the shots were fired," the witness states.

California and Nevada Are Now 100% in Drought

'It's Gonna Be Fun': Nevada Brothels Hot to Trot for Reopening

Las Vegas says TOPLESS bars can reopen at 80% capacity from May 1...

.@jbinnall's opening statement on evidence of election fraud in Nevada...