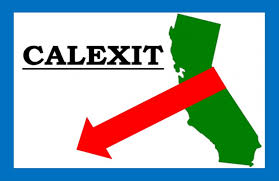 The world has been watching the play-by-play of Catalonia's bid for independence from Spain, but one group is tuning in more closely than most: California secessionists.

The California Freedom Coalition, the campaign that has taken the lead in the effort to break California off from the United States, sees similarities with Catalonia's secessionist movement. But there's an important caveat: they believe California has more legal tools at its disposal, creating an easier path to secession – if that's what Californians decide they want.

"There are definitely similarities in the fiscal situation – we both give more than we get back," said Dave Marin, director of research and policy for the California Freedom Coalition. "But there's more flexibility in the U.S. Constitution for secession than there is in the Spanish one. California has more tools available to it."

The Catalan Parliament, together with President of Catalonia Carles Puigdemont, approved in September a binding referendum to make Catalonia an "independent and sovereign state." Spain's constitutional court suspended the process, but Catalan authorities continued with the vote on Oct. 1, prompting violence between voters and Spanish security forces tasked with shutting it down.

After a majority who voted in the referendum cast ballots for independence, Puigdemont issued a symbolic declaration of independence from Spain on Tuesday, but immediately suspended it to ease negotiations with the Madrid government. Spanish Prime Minister Mariano Rajoy said Wednesday that the Catalan government had eight days to drop the bid or he would suspend Catalonia's political autonomy and rule the region directly.

Was John McAfee Suicided? Honoring his Legacy and Q&A