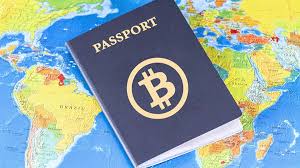 In the late 1500s, an Englishman named William Lee invented a revolutionary knitting machine that could efficiently do the work of dozens of men.

Given how important the garment industry was at the time in England, Lee's invention was truly disruptive.

But Queen Elizabeth wasn't so excited.

When Lee came to visit her to demonstrate the power of his new technology, the Queen grimaced, lamenting that the machine would put too many people out of work… and she refused his request for a patent.

So Lee went to France, where King Henry IV was highly supportive of the technology and issued a royal patent.

I was thinking about this story recently when I read about the government of Vanuatu announcing that they will begin accepting Bitcoin in exchange for citizenship.

If that sounds strange, let me explain–

Vanuatu is one of several nations that offers citizenship to foreigners in exchange for making an 'investment' in the country.

Malta. Cyprus. Saint Kitts & Nevis. Etc. These countries all offer what are known as 'citizenship by investment' programs.

(And dozens of countries, including the United States, offer 'residency by investment' programs, where foreigners receive legal residency in exchange for an investment.)

As I've written before, however, sometimes these programs would be more accurately described as 'citizenship-by-donation'.

Because, in many cases, you're not really making an investment. You're just writing a big check to the government.

Malta's Individual Investor Programme requires foreigners to donate 650,000 euros to the government. And that's only one of the qualifications. In Cyprus it's more than 2 million euros.

Vanuatu has had a number of similar programs over the years. It's MUCH cheaper, though you'll still end up spending north of $200,000 between the fees and investment.

Dominica's program is probably the best value for the money, with a donation of just $100,000 (not including fees).

And Saint Kitts is offering a bit of a 'special' right now through March 2018, providing citizenship in exchange for a $150,000 donation to their hurricane relief fund (that's down from the normal $250,000 investment in their Sugar Industry Diversification Fund).

This article originally appeared on SovereignMan.com

Bitcoin & The US Fiscal Reckoning