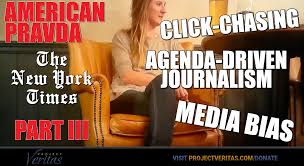 NYT Journalists: "if we write about him [Trump], and how insanely crazy he is...maybe people will read it and be like...we shouldn't vote for him."

Admits New York Times Report on "what the readers want"

"They call it the Trump bump" Says Shoe, Regarding the Influx of Subscribers Since Trump's Presidency Began

Des Shoe: "The main objective is to grab subscribers. You do that any way that you can."

(NEW YORK) - Project Veritas has released a video of the New York Times Homepage Editor Des Shoe, who was caught on hidden-camera admitting that the Times has a liberal bias and attacking President Donald Trump and Vice President Mike Pence. This is part three of their American Pravda NYT investigation.

When confronted with the notion that during the election, The Times' front page, for which she is responsible, was completely focused around Trump. She tells the undercover journalist that NYT reporters tried to influence the election with their reporting:

"I think one of the things that maybe journalists were thinking about is like...Oh, if we write about him, about how insanely crazy he is and how ludicrous his policies are, then maybe people will read it and be like, oh wow, we shouldn't vote for him."