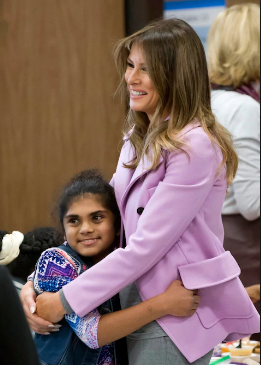 Melania Trump has publicly embraced the anti-bullying cause at the risk of drawing unfavorable parallels with a president who routinely resorts to brutal personal attacks and name-calling both on and off social media.

"I think it's important that we choose kindness and compassion," she told students at Orchard Lake Middle School, in a Detroit suburb, during a visit made as part of National Bullying Prevention Month.

"I encourage you to find a new friend," the first lady told the children. "Ask them what they like, what their hobbies are, so nobody becomes sad or stressed and everybody feels included."

Melania Trump, the mother of the president's youngest child, 11-year-old Barron, pledged during the 2016 campaign to make the fight against bullying a priority as first lady, and addressed the issue during a speech at the United Nations in September.

But her choice of a cause to champion has consistently raised eyebrows.

On the campaign trail, Trump displayed a propensity to attack personal traits of his opponents -- be it their stature, ethnic origin or even in one notorious case the physical disability of a reporter -- and since taking office has been regularly accused of using the presidency as a bully pulpit.