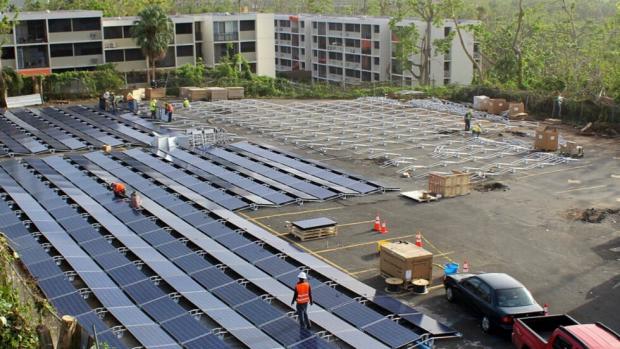 Power at San Juan's Hospital del Niño (Children's Hospital) in Puerto Rico has been completely restored, thanks to the donation and installation of batteries and solar panels from the California-based automaker and clean energy company, Tesla. Despite the extensive damage caused by Hurricanes Maria and Irma, there is hope that Puerto Rico will be re-built to with more efficient and sustainable technology.

Over the course of three weeks, Tesla's team installed solar panels and batteries in a parking lot next to the hospital. The panels will generate enough energy for the hospital to operate throughout the day, and also store energy for the night. According to El Nuevo Dia, San Juan's Hospital del Niño cares for 35 permanent residents and provides services to more than 3,000 kids and teens nationwide. Tesla founder and CEO, Elon Musk, said in an Instagram post that the Children's Hospital is "the first of many solar+battery Tesla projects going live in Puerto Rico." For now the energy equipment is a donation, however, in the future hospital directors may negotiate to make the technology permanent.

Millions of Puerto Ricans are still relying on generators for electricity. "As of Wednesday morning, the Electric Power Authority reported that its power service was at 25 percent", reported NPR. Total restoration of the grid is projected to be completed in six months, and the challenge carries a price tag of an estimated $5 billion.