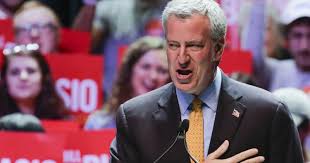 Imam Mohammad Tawhidi says he repeatedly warned New York Mayor Bill De Blasio about the terror threat in New York City but that he was ignored because De Blasio was more interested in undermining President Trump.

An Islamic terrorist pledging allegiance to ISIS killed eight people and injured at least eleven others yesterday, mowing them down in a pick-up truck on a bike track alongside West Street in Lower Manhattan.

Iranian-born Imam Mohammad Tawhidi revealed on Twitter that he had given De Blasio specific intelligence about the terror threat in the city but was rebuffed every time he reached out.

"About #NYC terrorist attack, I personally sent letters to Mayor De Blasio online & in person about terrorist breeding in NYC.He did nothing," tweeted Tawhidi, adding, "In 2016, I told Mayor De Blasio that I was in NYC and noticed some hot radical centres. I was willing to point out serious cases. Ignored!"

"Not only am I a Muslim Imam who understands the threat of Islamic Extremism, I also hold a certificate in counter-terrorism. Now what!?" asked Tawhidi.

The imam then suggested that De Blasio was more interested in trying to sabotage the Trump presidency than fighting Islamic extremism.

"Fact: In the last two years, De Blasio spent all his energy and resources in trying to bring down President Trump and not Islamic Extremists," said Tawhidi.

The Government's War on Domestic Terrorism Is a Trap

US government declares war on half the country: Baiting, panicked, or just crazy?