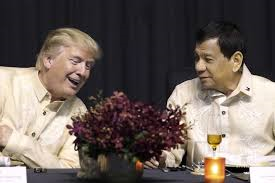 He called Barack Obama a "son of a whore." This week, he boasted that he murdered a man with his own hands.

All that may well go unmentioned in public by President Donald Trump when the leaders hold talks Monday.

Breaking with his presidential predecessors, Trump has largely abandoned publicly pressing foreign leaders on human rights, instead showing a willingness to embrace international strongmen for strategic gain. He has cozied up to autocrats such as Saudi Arabia's King Salman, Egyptian President Abdel-Fattah el-Sissi and Russian President Vladimir Putin. And earlier in this trip to Asia he made no mention of human rights during multiple appearances in Beijing with Chinese President Xi Jinping.

"Trump seems very comfortable with strongmen. It's not just that he won't criticize Duterte. I wouldn't be surprised if he patted him on the back," said Mike Chinoy, senior fellow at U.S.-China Institute at the University of Southern California.

Duterte's war on drugs has alarmed human rights advocates around the world who say it has allowed police officers and vigilantes to ignore due process and to take justice into their own hands. Government officials estimate that well over 3,000 people, mostly drug users and dealers, have died in the ongoing crackdown. Human rights groups believe the victim total is far higher, perhaps closer to 9,000.